This paper describes a toll road payment and control system in which a mobile device (for example mobile phones or tablets, etc) is used as payment device, instead of more complicated and expensive systems. The phone can allow users to start and end the trip of a vehicle inside toll areas. The system follows the current trends of moving most daily communications and transactions on mobile devices such as smartphones that today represent an almost indispensable tool. With the use of a simple dedicated application, (installed on the user’s mobile device), the user can start certification of payment at the beginning of the trip time. The application, based on user inputs, acts as an electronic ticket and certifies the use of the service and concurrently the payment,  testifying, to any roadside inspection, the actual payment of the trip. The system has many advantages and among them the easy implementation in any urban context, moreover the system proposed is absolutely original as it allows system managers of toll areas to collect fees through the use of mobile communication devices even in areas where there may not be voice or data and/or GPS coverage. Many researchers have already worked to define systems allowing payments and electronic transactions using mobile devices in the field of transportation. But the main obstacle to these systems is the need for an almost permanent internet connection on the device (Leea et al., 2008) or the presence of chip Near Field Communications (NFC) (Bravo et al., 2008). Other systems are based on the identification of the vehicle entrance and exit from the toll zone or instant communication with the system company through sms or signals transmitted by Internet (Burnham, 2008). In 1998, Hassett had patented a system for automatic toll payment through an electronic device in vehicles that is able to store the amount of money available to the user and emit signals near a structure able to use this technology. When the vehicle is near this kind of structure, the device captures a radio signal and calculates the toll which is charged to the driver. During the exchange of data, the driver identity and his credit, which are referenced to a bank account, are transmitted. In 2008 Korean researchers patented a similar method for the collection of highways data, such as revenues and expenditures in the payment areas, through the information that is gathered by a base station that records the position of in-vehicle mobile communication terminals used to collect tolls.
This was done through the exchange of data between different stations until the information can get to a control center which manages the whole system. In 2009, Robinson and others patented a system for billing based on the duration of a period of service, including the sending of the vehicle data by a third party to a toll authority by an online bank account. In the last years  systems  improvements have been carried out by researchers around the world, but they all, however, continue to maintain some restrictions with regards to the user possession of an internet connection or of an NFC chip (Ondrus et al., 2011). In 2012, to mitigate this problem, Astarita and al. patented the system we propose below, that is able to bypass actual limitations by exploiting current technologies in common use. The advantage of the proposed system is in the very limited resources needed to start and maintain the whole system, this allows also small city administrators to rapidly implement a toll area with immediate results. The system proposed applies a policy of toll fees based on the time of use of the road system (instead of the distance in travelled kilometres). This alternative policy, that can have advantages and disadvantages, raises new issues that must be scientifically addressed in order to establish the operability constraint and the sustainability in term of safety issues. Time of use toll policy has, in fact, the advantage of taking into account automatically congestion issues and allows city governments to introduce an useful mobile payment system without any additional infrastructure expenses, it has though the disadvantage of increasing the cost of travel time for users by adding to the travel time the monetary fee. This could encourage an aggressive driving behaviour if the toll fee for unit of time is too high compared with the value of the unit of time. All this practical issues are addressed more in detail in the paper  with some examples carried on a test network where traffic is reproduced with a micro-simulation model.

In the proposed payment system a mobile device, totally in off line mode, can be used as payment system, without the complications of other connected systems. With this system there is no need for any two-way communication between the system company and the vehicle during the trip, but this can be done safely at a later time. So there is no latency issues typical of connections to the Internet or the telephone line, or other problems that could occur as a result of radio shadows or other sources of interference. This methodology reduces times and costs in toll collecting. The system allows  the institutions (or the companies) that manage payment areas to run telematic services such as database querying and reporting, the issuing of warnings or sanctions, the acquisition of encrypted data transmitted by mobile devices, defect rectification and telematics transaction of money, as well as make use of the classic control of traffic operators (police officers or other) as supervisors. The basic idea of this system is to run on mobile devices, with any operating system (like Microsoft Windows, GoogleAndroid, Apple iOS, Samsung Bada, etc..) an application standard or web-based, which can store, in an encrypted form, inside the device, the moments of beginning and end of the use of the vehicle in the payment areas and in addition to obtain the driver statistics on congested areas of the road network. 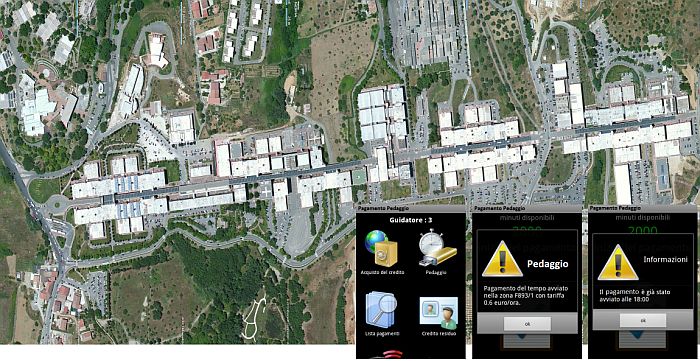 Drivers who can use this payment system, only have the preliminary need to install an application on their device and acquire credit, as the system works in a prepaid way. In other words the user must first buy the credit from service provider, which will then be gradually scaled according to the duration of his travels in various areas managed by the system. The driver, once entered in a toll area, simply starts the application on his mobile device, so he can make a self-certification of the beginning of the period of use of the service. The application in fact has been designed with a minimum of artificial intelligence, capable of detecting the case where the user, once the application is started, tries to discontinue the execution to avoid the payment, or other cases which are attempts to fraud the system. The application, installed in the mobile device, primarily records the time of entry and exit of the vehicle from the toll area, and of course records the purchase of credit and the transmission of data to the system operator. Data transmission with this system, can be done  in a second time and not necessarily at the exit of the toll area (within the limits set by the system company). This methodology also allows managers of the system to use the classic traffic road operators for the verification of moving vehicles in the road network. Routine roadside inspections can be performed just checking that the application is running on the mobile device and everything is up to date with payments.

The system proposed has been presented and all advantages and disadvantages discussed. The concept of time of use toll policy, raises new issues that can be scientifically addressed in order to establish the operability constraint and sustainability. Research efforts can be carried out in this new direction, yet a practical implementation of the system may experimentally prove if the system is feasible or some correction needs to be applied. Safety issues could be mitigated by lowering the fees for users that accept to use GPS tracking while they are using the application on the mobile phone. This would allow to monitor the driving style and eventually apply a carrot and stick strategy to fee structure in order to increase safety for all users. This feature of GPS tracking could bring the advantage of taking into account automatically congestion issues and would allow city governments to obtain traffic measures and inform in realtime system users about the traffic on the network. Such information could then be provided in various ways, such as directly on the mobile device, on the internet or on special information boards at the roadside, etc. The possibility to access this information would allow drivers to avoid or postpone movements in case of traffic queues.
In addition, the advantages of being extremely pocket convenient, the possibility to manage toll payments as a common online purchase, and the possibility to collect  an huge amount of detailed data make this system highly competitive compared to other existing toll and management systems of restricted traffic areas, ensuring lower access times and lower operating costs.